The “Bergkirchweih” is calling

Every year before Pentecost, there is traditionally a very special hustle and bustle in the university town of Erlangen: the Bergkirchweih on the Burgberg in the north of Erlangen, which is well known far beyond the city limits. Cold beer, wild rides and plenty of good humor lure young and old up the mountain from all directions. Pupils are looking forward to the end of the day, adults are taking vacation or going to the mountain together with their colleagues.

The history of the Bergkirchweih

At that time, the Bergkirchweih 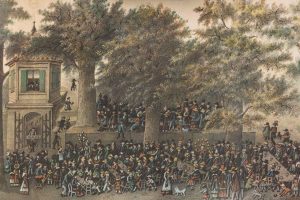 in Erlangen developed from the traditional Whitsun market, which was first relocated in 1755 around the old town shooting house on the Burgberg. Incidentally, the Italian restaurant “La vita è bella” is located about there today. What was practical about this event location was that the rock vaults of the beer cellars were in the immediate vicinity in the mountain, where the beer was stored until the early 20th century to mature and then served to the thirsty visitors at the church fair. As a result, the “mountain” attracted more and more onlookers and has taken place almost every year since 1755. Thus, the Bergkirchweih is even older than the Munich „Wiesn”! 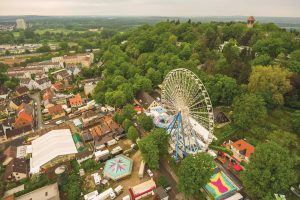 Nobody goes to the shooting house anymore, but on the Thursday before Pentecost from 5 p.m. the proper starting signal for the fifth season of Erlangen will still be given: as custom dictates, the mayor of Erlangen can tap the first keg of festival beer at the so-called “tapping”. This is then distributed to the waiting crowd in the popular steins with the logos of the 15 beer cellars. And then it’s all going on for 12 days on Erlangen’s Burgberg: at the weekend, when the weather is particularly nice, it’s sometimes only possible to get through very slowly, because a total of more than a million people stream across the site. That is ten times as many people as the city of Erlangen has inhabitants! During the day you will mainly find families with children at the numerous raffle booths and wild rides. A ride on the Europarad, the largest transportable Ferris wheel in the world, is less wild. If you have a head for heights, you shouldn’t miss it! In the evening there is live music in the western part of the festival street, until everyone is standing on the tables holding each other in their arms – or at least swaying along…

Not only for party fans! 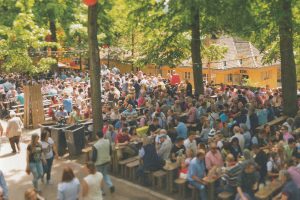 there is something for everyone, because the spectrum ranges from classics such as “Que sera, sera” to “Hulapalu” or “Breathless” and thus also reflects the diversity of the mountain visitors very well. Despite the always boisterous atmosphere, the fun ends at 11 p.m. sharp: if you want to continue partying after that, you can go down to the clubs in downtown Erlangen to one of the so-called after-mountain parties.

But if you want to take it a little more leisurely, you can also round off the day in the evening under the linden, chestnut and oak trees decorated with lanterns with a pint of beer. You are expressly allowed to bring your own snack! 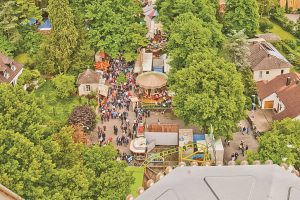 Incidentally, the many different types of beer on the “Berch” such as Tucher or Mönchshof are now only stored in the entrances to the beer cellars for this festival. Unfortunately, only the Entlas beer from the Entlas cellar and the Steinbach brew from Erlangen now come from the Bergkirchweih. Because the Huguenot town with its cool beer cellars in the mountain no longer has a home advantage in the beer trade as it did until the invention of modern cooling technology at the end of the 19th century.

Insider tip: In order to be able to estimate how crowded the site is before you visit, there is a live Berchcam. There is also more information on the Bergkirchweih rules on this official website, because for a number of years visitors’ bags have been checked for alcohol or prohibited items at the entrance.

On the last evening, at 11 p.m., the last beer keg is symbolically buried to the sounds of “Lili Marleen” at the Erich-Keller, while the visitors sing along loudly and wave white handkerchiefs in sad farewell. “Best mood Erich-cellar” just. Until next year!

What is biophilic design?

Who doesn’t know it? After a stressful week just… mehr